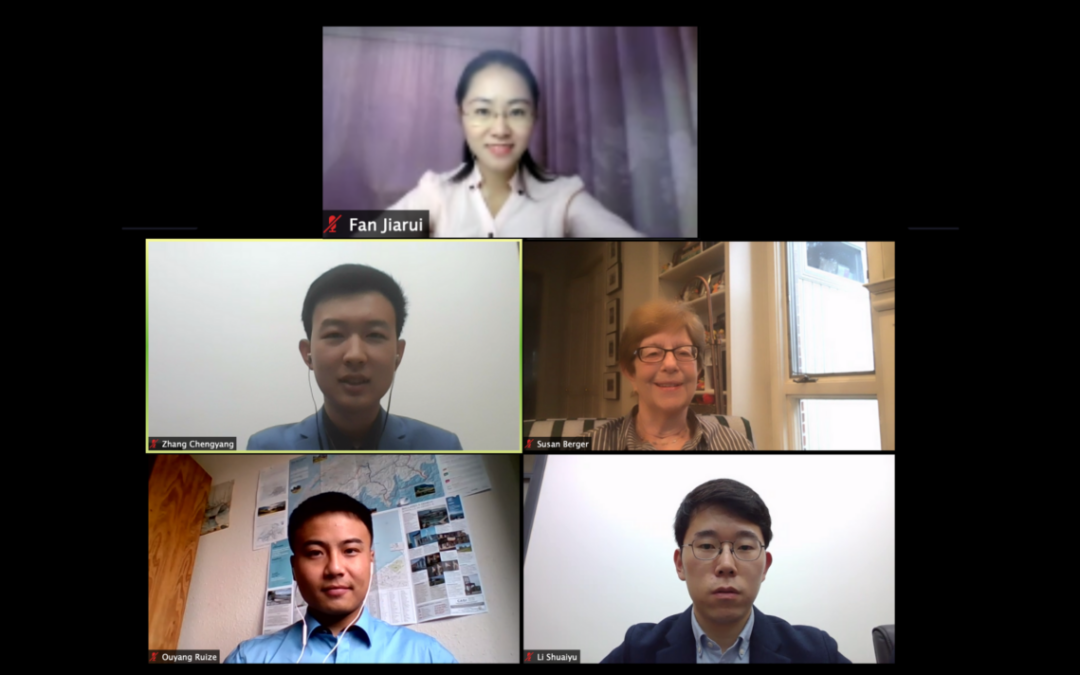 The Sandy Berger Memorial Fellowship was established at Peking University Education Foundation (USA) in 2019 to celebrated the life and legacy of the late Honorable “Sandy” Berger, former National Security Advisor to President Bill Clinton. The Fellowship was proposed by Julia Chang Bloch, President of the US-China Education Trust and former U.S. Ambassador to Nepal, who was entrusted by Susan Berger, wife of the late Honorable Samuel Berger. In Sandy’s spirit, the Awards seek to support scholarship on US-China relations and to strengthening the invaluable people-to-people exchanges between the U.S. and China.

Prof. Qingguo Jia, Professor at the School of International Studies and Director of the Institute of Global Cooperation and Understanding at Peking University (PKU), opened the ceremony by reading remarks from Prof. Bo Wang, the Vice President of Peking University. In his speech, Prof. Wang reflected upon Sandy’s contributions to PKU’s foreign exchange program and expressed high hopes that the PKU scholars will continue to serve as representatives of the new generation of global leaders and work together to open up even better prospects for the future of the relationship between our two countries.

During the ceremony, Mrs. Susan Berger, the wife of the late Sandy Berger, gave a moving speech highlighting Sandy’s lifelong friendships in China and passion to make the world a better place through diplomacy. Mrs. Berger emphasized her excitement and gratefulness for the Fellows and their research, “Sandy would be delighted to hear about the work you four scholars will be pursuing as Berger Fellows and throughout your work he would be encouraged to know that there is a new generation of stewards dedicated to promoting our bilateral relationship. Thank you for carrying the torch of his efforts and honoring his memory.”

Amb. Julia Bloch, Founder and President of USCET spoke on behalf of USCET, offering her congratulations to the Berger Fellows, recounting her own experience at PKU, the founding USCET, and her insights on the path forward for diplomacy between our two nations. “Our hope for the future,” she argued, lies in the next generation.

Prof. Shiqi Tang, Dean of the School of International Studies at Peking University, also stressed the importance of person-to-person exchange, especially in the post-COVID political climate. He shared thoughts on how to be a good diplomat and effective researcher and how this especially relates to his Fellows at PKU. “I think the Berger Fellowship and the cause of U.S.-China people-to-people exchange are to pursue a high level of understanding, trust and friendship between China and the U.S.”

Ms. Lynn Zhao, President of Peking University Education Foundation (USA) and Mr. Zhu Yibo, Deputy Secretary of the Party Committee of the School of International Studies at Peking University, further echoed these sentiments, supporting the value of education exchange, as Ms. Zhao emphasized, “I have no illusions that the road ahead of us will be easy, either for short end or the long haul. But today we are working together and I believe that we will meet the challenges with both humility and courage.”

Four awardees of the “Sandy” Berger Memorial Fellowship were celebrated: Ms. Jiarui Fan, a doctoral student; Mr. Shuaiyu Li, also a doctoral student; Mr. Ruize Ouyang, a postgraduate student; and Mr. Chengyang Zhang, an undergraduate student. They shared their thoughts and ideas in the presentation process. Ms. Fan presented on the “Formation and Practice of Navigation Rules of the Maritime Passage”, focusing her research on the Malacca Strait and how international traffic helped from stable regional governance there after World War II. Mr. Shuaiyu Li presented on “The United States and East Asia in Globalization: Commitment to the Open Economy and Its Challenges”, focusing on the new era of globalization, as well as the unique challenges it brings for East Asia and the U.S. Mr. Ruize Ouyang presented on “Biosafety Issues in China-U.S. Relations”, emphasizing how the U.S. and China have tremendous benefits for collaboration. These benefits serve as excellent reasons why, Mr. Ouyang argued, the U.S. and China should take global leadership roles in governance on biosafety. And Mr. Chengyang Zhang shared his research on “Understanding the ‘Self-Assertion’ by Secondary Powers: Structural Rigidity and Internal Mobilization”. In his presentation, Mr. Zhang shared why he believes secondary powers choose “self-assertion” and how this relates to the U.S.-China global power balance.

Prof. Qingguo Jia concluded the ceremony by contextualizing the Berger Awards in the larger political movement away from bilateral cooperation between the U.S. and China. “This event takes place at a time when our two countries are in difficult times…Only through constant contact between our peoples can we appreciate each other’s concerns and aspirations objectively and formulate appropriate policies on that basis. Only through constant contact can we find ways to live peacefully and prosper.”

With interests in the study of global environmental policy, U.S.-China relations, and international organizations, Mr. Ouyang is enthusiastic to further pursue academic research in environmental politics and sustainable development in the future.

Outside of the classroom, Mr. Ouyang is an active member of his university community. At Nanjing University, he served as President of the Student Union and pursued many extra-curricular activities including chorus, football, and participated in various academic forums. During his postgraduate study at PKU, he has worked as a Student Assistant in the University’s International Cooperation Department.

Mr. Ouyang plans to use his fellowship funds to research topics including “comparison of polar policies between China and the U.S.”, “impact of domestic factors (Congress, stakeholders, etc.) on the green development policy of the United States”, “history, orientation, and prospect of the global environmental governance cooperation between China and the U.S.”, among other topics.

Mr. Chengyang Zhang (张诚杨) is an undergraduate student at the School of International Studies at Peking University (PKU) studying International Politics. He has participated in programs at leading global universities, such as the Paris Institute of Political Studies and the University of Tokyo. He is also a part of the Talent Cultivation Program of the Social Science Foundation and attended King’s College of London’s Department of War Studies’ summer school program.

Outside of his undergraduate studies, Mr. Zhang has received many academic accolades and participated in many extra-curricular activities. He has been awarded the National Merit Scholarship, was chosen as a School-level Merit Student, served as the Committee Chair for the Model United Nations, and won a prize in the Sino-Hellenic “Belt and Road Innovation and Startups Summit held in Greece.

Mr. Zhang plans to use his fellowship to pursue his many research interests including U.S. politics, security, and trade in U.S.- China relations. Currently, he is researching topics of dispute on U.S.-China economic models and U.S.-China trade frictions. In the future, Mr. Zhang strives to conduct further research in these areas and contribute to scientific data collection in American universities.

Outside of his studies, Mr. Li has pursued many opportunities to enhance his knowledge of international relations. Mr. Li was awarded a scholarship for the Leadership Student Exchange Program, through the Korea Foundation for Advanced Studies, and the JASSO scholarship from Japan’s Ministry of Education, Science, and Culture

Mr. Li’s research focuses include U.S.-East Asia relations after World War II from the perspective of reconciliation and comparative studies on the U.S. and East Asia against the background of economic globalization. He hopes to apply the fellowship funds to further his ongoing research on U.S. politics and economy.

As an accomplished scholar, Ms. Fan has won 15 national, provincial, and university-level honorary titles. In addition to the Berger Fellowship, she has been awarded many scholarships including the President’s Scholarship and National Scholarship. Furthermore, Ms. Fan is an accomplished researcher, having authored over five articles including the Establishment of China-ASEAN Community of Shared Future, published in the Journal of Contemporary Asia-Pacific Studies.

Ms. Fan has a strong interest in global and regional oceanic governance, international shipping safety, maritime strategic channels, and studies on Southeast Asia. She plans to use the fellowship funds to pursue field research in her target countries (the United States and Singapore) and surrounding areas. Additionally, she plans to conduct further research at renowned universities that have made great achievements in the fields of international relations, international law, and international shipping logistics in order to compare different models of international and regional shipping safety governance. She hopes that by conducting this research at a variety of universities, she can better understand what motivates differences between the U.S., China, the Southeast Asian countries in these topic areas. 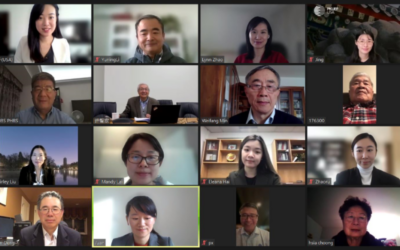