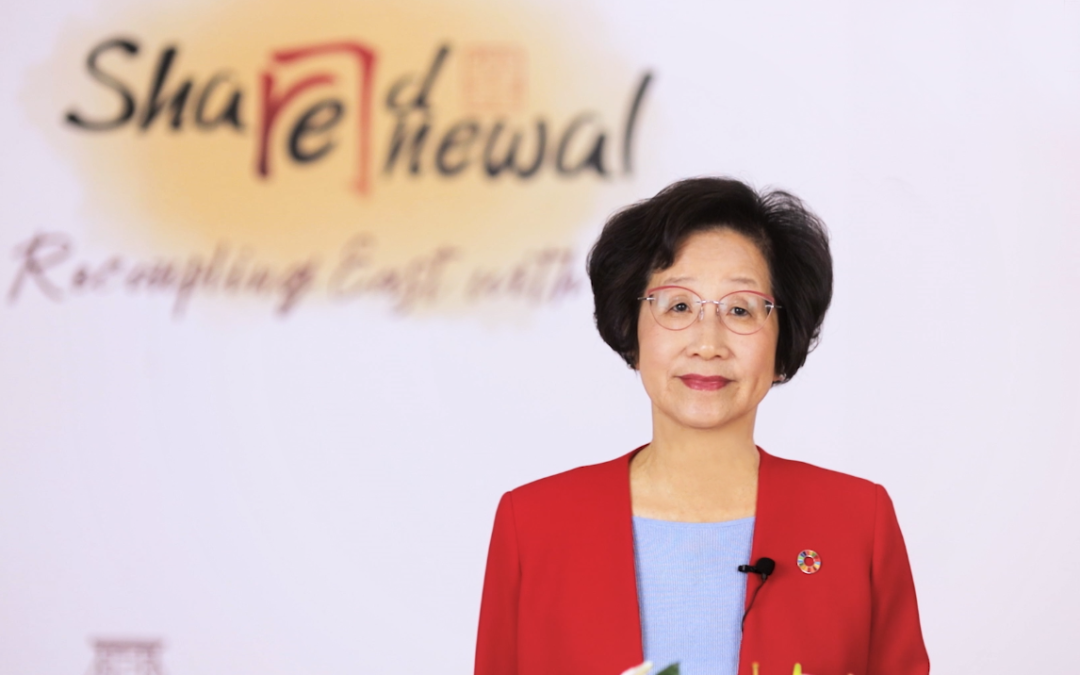 On April 16th, 2021, the opening ceremony of the Yenching Global Symposium was held both in Beijing and virtually all over the world. Professor Yuan Ming, Dean of the Yenching Academy of Peking University, delivered a keynote speech entitled “‘Wo’men’: Recoupling East with West”. Please see the following for the full text of the speech.

It’s truly a great pleasure and honor to speak here. For these passed YGS openings, I got used to deliver the welcome remarks as the Dean of the Yenching Academy of Peking University. But this year is different, I have to say that I accepted the warm invitation even without a second thought to do this keynote speech. The reason was quite simple: I was so inspired by the theme “Shared Renewal: Recoupling East with West”. This call is from you, the Yenching Scholars, a group of thoughtful young people, and a call from my own heart.

In today’s world, we have been witnessing a re-surging of different versions of “us versus them” narratives when it comes to relations between countries, group identities. It should be noted that all versions of this kind are predicated on one particular cognitive pitfall, which is the essentialization of self and the other. When essentializing the self into a “pure”, “unique” and “uncontaminated” entity, the other is rendered a threat towards this self. As manifested in Kipling’s poem, “East is East, and West is West, and never the twain shall meet.”

However，the truth is that they do not only meet but whose very reflected selves in the encounter are enmeshed within their interlocutory history. To remind us of this simple but often neglected fact, I want to refresh our memory by looking at one particular Chinese word: culture or wen-hua.

We talk about Chinese wen-hua all the time, but this very term wen-hua is actually not directly passed on from Chinese traditional culture. Literary scholars notice that this term was in fact one of many import terms from external at the turn of 20th century. This influx of new words into literary and vernacular Chinese followed a typical pattern; that is, the Japanese used kanji (Chinese characters) to translate European terms, and the neologisms were then imported back into the Chinese language.

Though the same Chinese characters have long existed over thousand years, our modern use of this term has radically changed due to this importing process. The modern meaning of wen-hua (culture) derives from the Japanese kanji compound “bunka”, and it is through borrowing that an equivalence was established between the Chinese wen-hua and the English “culture” (French culture; German die Kultur). In classical Chinese, wen-hua denoted the state of refinement or artistic cultivation as opposed to wu or military prowess, carrying none of the ethnographic connotations of “culture” commonly associated with the two-character compound in today’s usage. Here east and west not only met, but also mingled to a renewal.

A lot of modern Chinese words came into existence in this pattern, zong-jiao (religion; shukyo), ke-xue (science; kagaku), jing-ji (economy; keizai) are all examples. In these cases, we see concepts travel back and forth from different languages and cultures. Like Odysseus in his journey, words embark on their own journeys that leave their own original “home” but only to return with much richer meaning and vitality.

The great founding fathers of Peking University contributed significantly to introduce many key terms into modern Chinese and set the foundation for the modern learnings. One of the pioneers was Cai Yuanpei (蔡元培). In 1903, Mr.Cai translated “The Essence of Philosophy”, originally a German classic but was introduced to Japan during the Meiji Restoration. In 1918, Hu Shi (胡适) published his textbook on the history of Chinese philosophy, enriched the learning by combining the German origin, the Japanese interpretation, and the thoughts of the Chinese ancient thinkers.

Dear friends, we are now on the new journey. Not only do we inherit past recoupling between east and west, we can also actively facilitate new recoupling that belong to our own times. As mentioned above, recoupling can happen at a very simple but fundamental level, which is language. By actively creating new “journeys” for words and expressions to travel back and forth among different cultures, even the exact same words can begin to take on broader implications.

In 2019 the theme of YGS was “Wo’men” (我们), as Chinese pinyin it signifies the Chinese word “us” while as English it means “women”. This seemingly accidental link actually expressed profound inspirations for both Chinese and English languages when we reflect on these words. For Chinese, we cannot forget that though it is a 5000 year old language, but in which female personal pronoun “她” only celebrates her 100-year anniversary, this profound connection, keeps reminding us that gender can never be a neglected dimension in our self-representation. On the other hand, for English, “women” as “wo’men” or “us”, the reversal linkage is a reminder that every battle for any specific group is also a battle for all humanity. We are never alone since we are all in this together. It’s a message of solidarity that can help us transcend various confinements of identity politics and realize beneath differences we are standing on a firm common ground, a shared destiny.

A group of 2020 Yenching Scholars have given a new lift to express the broad meaning of “us”, or “wo’men”. This time they chose a way of artistic exploration. In Jingyuan Courtyard 4, the lanterns were carefully designed on the ground to ensure they are bright enough to light the path, but not too bright as to preserve the poetry of a Chinese garden. The color gel is red, spotted artistically on the window glass, intrigue people to the specific moment when the refracted sunlight forms a glorious huge butterfly on the wall. Once again, the cultural capabilities of Yenching Scholars got a full display, especially at the current moment when the pandemic brings a huge shadow on the humanity. Once again, the classic Chinese “wenhua” carries new meanings in the new era. And once again, we understand much more about the importance of empathy. One line from Book of Odes speaks this truth: 周虽旧邦，其命维新. Although Zhou was an ancient state, it had a reform mission. When one of the pioneers who contributed to the recoupling east and west, Kang Youwei, reiterated the ancient Chinese concept of 大同 (the great unity) in 1901, it was after he travelled the world and thought about different modes of development across the globe. Therefore this same term 大同 then took on a higher dimension than the original ancient usage. Historian Arif Dirlik put it best:

“The utopia drew its name and virtues from a native Chinese utopian tradition, but already its inspiration came from the future—a future, moreover, that transcended China’s own world and took as its scope the global society of which China had just become an integral part.”

What this revisiting of Chinese modern history should tell us that the recoupling between east and west is not only a good wish for the future, it’s already a historical fact for our mutual past. It’s what carried us this far in our collective achievement of globalization and modernization. We, as students, colleagues, friends from different backgrounds, are all living testimony to this shared history.

I would like to conclude the speech by quoting Fei Xiaotong, an extraordinary sociologist of contemporary China. “We cherish the values of our culture as much as we appreciate the values of other cultures, and based upon the appreciation of our common humanity, we can achieve a moral consensus for the peace in the world.”